“Jon-Jon?” I called out. “Are you ok? What was that thumping sound?”

“That was no thump!” Free-Jon shouted from his room. “That was me!”

He ran down the hall and tackled me in a monster hug. “I just tucked you in five minutes ago! Did you have a dream already?”

“It wasn’t a dream! It was the Lyin’ Witchin’ Thingamaroo! And I’m back! Honey! I’m home!” Elder joined us and gave me the biggest kiss. “I been time-looping!” Free said. “I’ve been old and young and hungry and full and at Granite Falls and Wolfflandia and Sixam! I’ve been everywhere!” “I don’t know what you’re talking about,” I said, but just as I said those words, I felt this wave of space rushing back over me, all mixed with worry. 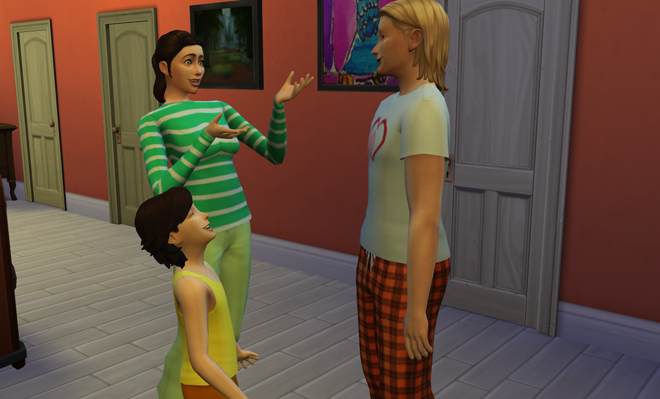 We laughed and tickled each other and, just for the fun of old times, scared each other with loud “Boos!” and it felt so good to be a family again.

“And you’re home just in time for Summer Camp!” I said. “It starts next week!”

“No!” said Elder and Free-Jon simultaneously. “If you’re sure,” I said. I know that Free had really been looking forward to going to CT’s Animal Hat Summer Camp, but if they both feel it’s best to skip it, I’ll trust them. “Well, I guess she’s still at S-GAS, at the post-keynote-speech parties and stuff,” I replied.

Elder looked worried. “We’ll find her, Free,” he said. “Don’t worry. We’ve got you back. I’ll get her, even if it takes another eternity.”

“We gotta get her back,” Free said. “I promised I would never forsake her, not so long as we both shall live.” “Let me check the forums on the computer,” Elder said. “Maybe somebody’s spotted her.”

Free and I sat together. “Like Lina and Fundevogel, huh, Free?” 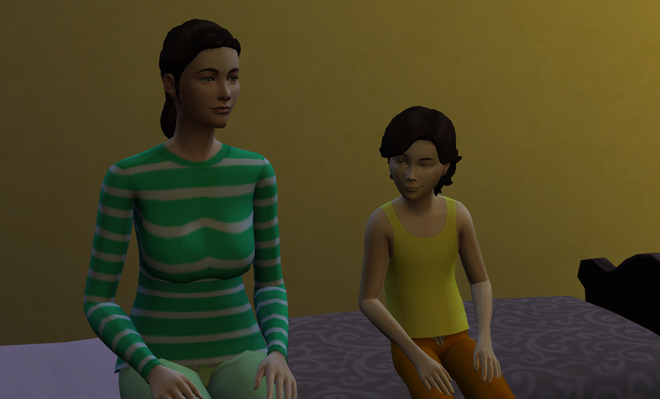 “We heard that story at camp, Mom,” Free said. “It all went wrong. We were together, and then. I couldn’t reach her hand! Where is she, Mom? Don’t let her disappear.”

I didn’t know what to say. I just held him.

“I don’t know much,” I told Free, “not about time and space, but you know what, Free? I feel that Aristotle and the medievals were right. When it comes to the power that moves the universe, it’s eromenon–love. Kinei os eromenon. That’s the force that moves the planets in their spheres. That’s what draws two people together, what brought your dad to me and what brought you back home again. Love’s strong enough to bring anyone anywhere.” Free wiped his eyes. “And anywhen?”

“I’m sure of it. I bet you’re hungry, after all those adventures.” I went down into the kitchen to whip up a batch of spinach frittata, with extra gouda, just the way Free likes it.

“Do you remember anything that will happen in the coming months?” Elder asked, following me into the kitchen.

“I don’t know how I can remember it if it hasn’t happened yet,” I said. “Are future memories real?” 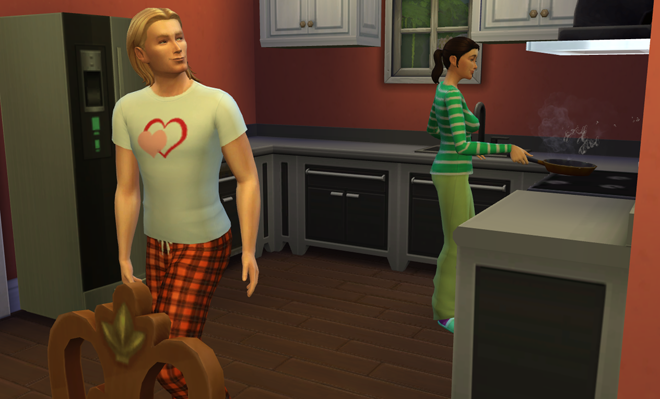 Elder began telling me how Free went to summer camp to be joined by Emelia, who traveled back in time to be a kid with him, and how they had such a great time that we let him stay for a second session, and then how, when our niece Amina came to take Free home to visit Elder’s family, Emelia and Free-Jon talked her into accompanying them on what was intended to be a time-loop through the time-space thingy. But it went wrong, and they didn’t return before they left, in Wrinkle-in-Time fashion. And that’s when Elder went off to find them, searching through hard drives all over the Simiverse.

“But you’re the one who solved it,” Elder said.

I felt a shiver. 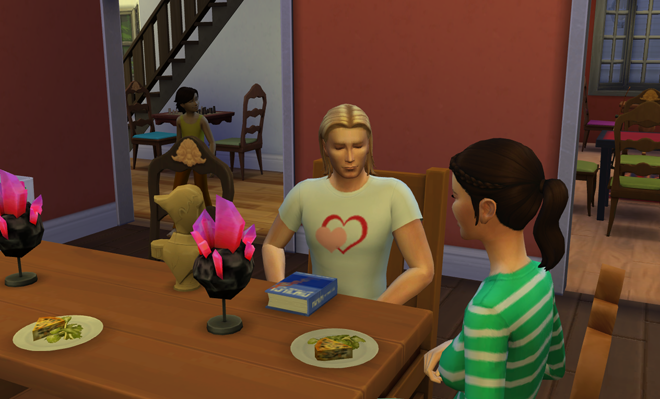 “Have you ever felt future deja-vu?” I asked.

“Only a million times,” he answered. And he told me about how I met him in the Gallery, where my research led us to Paul Davies’ theories about harnessing black holes to travel back in time to the moment before one departed. “And that’s how Free–and me–got back to tonight. That’s why all that has already happened is in the future.”

“But we’ll bypass that pathway this time, right?” I said. “No summer camp. No point of departure.”

“Free,” I called. “Come get your snack while it’s still hot!”

We were together, the three of us, in our big family kitchen. 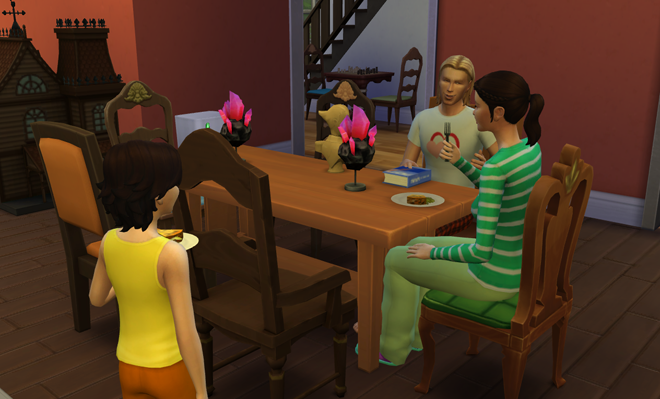 Elder told stories of all the places he’d been in the future–where there were tragic clowns, and Sims that were somehow very beautiful even with long chins and pointy noses, and where he’d met another Alexander whose grandkids went to that same summer camp that Free had been to. And all along, I watched our boy, feeling the pain that most of us don’t feel until we’re teens or older. I wondered what this experience–all these travels, all this sudden and deep loss–would bring to our little boy. Most kids might have to say good-bye to a grandparent or great grandparent, to a family pet, to friends and neighbors if they move to a new town. But to be separated in this way from someone who’d traveled through time and space so they could be together–that was hard for me to comprehend. That would be like me, if Elder had never found his way back from Desert Leaders on that Valentine’s night.

We heard a knock on the door.

“Kinda early for a visitor,” I said. Vadish from Cathy Tea: This project was a wild and free collaborative adventure! So much thanks to JordanNicoleJJ, whose understanding of the strength and valiance of kids shaped the vision for this project! So much thanks to FloorRaisin, who shared Elder in the first place and who, in that way, contributed to Free’s even being in digital existence, and who provided a fun twist to the kids’ adventure. So much thanks to Raerei, who followed all of our crazy plots and somehow managed to braid them together into a seamless tale which brought the kids safely home.

Thanks to everyone who let Elder search their hard drives for the lost kids and his niece. (You’ll be happy to know that Amina Wolff is safely settled back in Wolfflandia.)

And thanks to every reader who followed along and cheered for the kids to make it home again! Your faith–and your love–is the power that moves the spheres, eromenon.